Who Is Thanos The Mad Titan?

April 27th is rapidly approaching and if you are a Marvel fan you are probably overcome with anticipation for Marvel Studios’ Avengers: Infinity War. Here at Arctify we have also been eagerly awaiting the Avengers: Infinity war release and have recently expressed our joy with the revealing of our April theme! While the Marvel Cinematic Universe has been steadily building up to Avengers: Infinity War, we still know very little about the main antagonist Thanos. So who exactly is the “Mad Titan”? 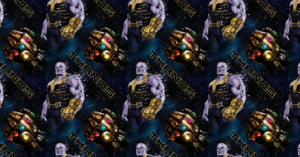 Since the ending sequence in The Avengers film, we have been seeing short cryptic clips of Thanos acting behind the scenes. We know that he gained control of the Chitauri army as he sends them to earth to aid Loki in The Avengers. Through his dealings with Loki and Ronan the Accuser we know he is actively seeking the Infinity Stones. From first hand accounts made by Nebula and Gamora we know that he killed Gamora’s people and adopted the two, cruelly raising them as assassins. During the mid credits of Avengers: Age of Ultron we see the fed up “Mad Titan” go retrieve his Infinity Gauntlet and exclaim he will collect the Infinity Stones himself. While we know he is powerful, cruel and is a warlord that commands two armies (the Chitauri and the Outriders), we know very little of his origin and inspiration to cause mass devestation on a galactic scale.

“Yes, one of the big challenges is how to make sure he’s not just a relentless machine collecting stones like he’s going shopping,” McFeely said. “So we want to give him a full weighted emotional story. You can kind of say this is Thanos’ origin story so that he will get the weight of any of the previous heroes in terms of the decisions he has to make in order to get what he wants.”

“This is not an origin story… very often we’re trying to get a character up and off the ground and so the bad guy tends to be a foil for the development of the hero. That’s not the case here, if anything its the opposite. Our heroes are foils for our villain who’s story we need to tell”

Based on the responses by Christopher Markus and Stephen McFeely we can infer that during Avengers: Infinity War we will gain some insight into the origin of Thanos.

With the Arctify tee for April scheduled to ship in a little over a week, we are anticipating subscribers to receive their tee around the release of Marvel Studios’ Avengers: Infinity War. We are really impressed by our design teams work for this month’s tee and can’t wait to see what you guys think about it. Make sure to tag us on social media with #IAmArctify so we can hear you.