The new Marvel’s Luke Cage tees for July have all been shipped and this month’s theme –Marvel’s Amazing Spider-man has been revealed. That’s right! Arctify subscribers will get an all new tee inspired by their friendly neighborhood Spider-Man for August! Since he first appeared in 1962, Spider-Man has quickly become a favorite to many Marvel Comic fans. In looking to balance his life as Peter Parker while fighting crime as Spider-Man, he came across many powerful villains that threatened the lives of New York citizens. Here are some of the most notable Spider-Man Villains!

Norman Osborn — a highly intelligent and successful businessman — founded Osborn Chemical shortly after graduating from college. He married Emily Lyman and together they had a son Harry Osborn. Shortly after Harry’s birth, Emily became ill and passed away. Norman reacted by burying himself in his work and had no time for his son Harry. Norman soon discovered a serum created by his business partner that would grant him super-human strength . 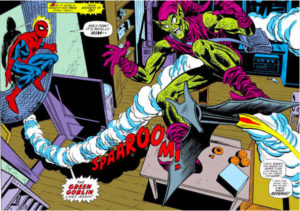 Fed up with being constantly ignored by his father, Harry replaced chemicals in the serum which caused it to explode in Norman’s face. Upon awaking in the hospital, Norman found himself with an acute ability to think clearly, unknowingly however, he would soon become insane. He soon sought to achieve power beyond his wildest dreams and planned to unify all independent gangs beneath him. To establish his power and credibility, Norman decided to to set Spider-Man as his first target and developed a costume resembling a monster from his childhood dreams, becoming the Green Goblin.

Eddie Brock was an exceptional journalist for the Daily Globe. After being contacted by Emil Gregg who claimed to be the serial killer Sin-Eater, Brock began writing popular first page exclusives on the Sin-Eater, while protecting his identity under the First Amendment. Being pressured by both his conscious and the police, Brock decided to publish a front page exclusive revealing the identity of Sin-Eater as Emil Gregg. That edition of the paper quickly sold out and later that same day Spider-Man captured and revealed the identity of Sin-Eater to be detective Stan Carter. Gregg was revealed to be a delusional neighbor of Carter and Brock quickly became the laughingstock among the other journalists.

Brock was then fired from the Daily Globe and was forced to work for a lowly tabloid magazine when his wife Ann decided to leave him. Brock blamed all of his misfortune on Spider-Man and began a strict workout regimen to reduce his stress. Although he honed his physique, his mind became increasingly consumed by hatred for Spider-Man.

Deciding to visit the “Our Lady of Saints Church” to beg for God’s forgiveness he decided to enter the church where he finds the Symbiote suit. Attracted to Brock’s hatred and despair, the symbiote quickly bonded both physically and mentally with Brock. Corrupted by an overwhelming hatred toward Spider-Man, Brock quickly became overcome with his emotions and named his new symbiotic bond Venom.

Being highly intelligent and driven by the death of his father, Otto Octavious graduated at the top of his MIT class where he then went on to study at the Atomic Research Center. Looking to develop a way to safely manipulate radioactive materials from a safe distance, Otto developed a chest harness which allowed him to control four mechanical arms granting him the nickname Doctor Octopus.

While at work one day Otto was handling volatile liquids when they exploded. Otto was exposed the radioactive particles which left him capable of controlling the metal arms with his mind, however, this left him with severe brain damage — turning him into a deranged criminal. 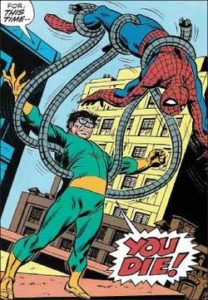 That concludes the short Arctify list of notable Spider-man villains. Despite us only listing three villains, Spider-Man faced off with many other villains which we encourage you to read about! Make sure to follow us on social media and let us know who are your favorite Spider-Man villains. The Amazing Spider-Man inspired tee will ship out at the end of August, so keep an eye out for this one!