The Spider-Man Multiverse themed tee for November have been shipped and the December theme is scheduled to go out for the end of December! Every December we release a holiday themed tee in anticipation for the holiday season. This December’s tee is a comic-styled holiday Deadpool theme! In celebration for the tee, here are some of the top Deadpool crossovers.

Deadpool and Bullseye have a longstanding history with each other. It is believed that they had been childhood friends and became mercenaries around th same time. At a later point, Bullseye accepts a mission where he is to assassinate a woman. Coincidentally, Deadpool i hired to protect the same woman. 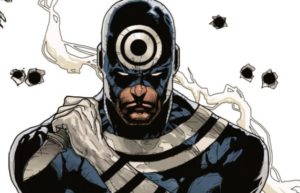 The fight is fairly even and Bullseye strongly expresses his distaste for Deadpool’s heroic actions. as the fight wages on, Deadpool manages to gain the upperhnd by impaling Bullseye. Though the wound was not fatale, Deadpool came out as the victor in this battle.

While working with the time traveling arms merchant Tolliver, Deadpool was sent on a mission to kill Tolliver’s father Cable. When he managed to finally find him, he was overcome by Cable and his group of New Mutants. Later on, the two had to team up when their DNA was linked together through contracting the Facade Virus. The two were later returned to normal after Cable destroyed all instances of the infection worldwide and went on to team up  number of times .

Deadpool and Wolverine have a very interesting relationship. Wolverine is Mutant who has a adamantium claws, heightened senses  and exceptional regeneration abilities.  While Wade Wilson was quickly dying of a form of cancer, h enlisted to be a test subject for Project X — a super soldier program. as a result he gained Wolverines regenerative abilities.

Though sharing similar powers, the two did not have matching personalities and rarely got along. More often than not, when Wolverine and Deadpool crossed paths, it resulted in extremely violent fights. If it were not for their highly regenerative abilities, these two would have likely killed each other by now.

The Holiday Deadpool tee will be shipping out for the end of December. Make sure to tag any Deadpool fans who need this tee, and be sure to let us know what you thought of our recent Spider-Man Multiverse tee on social media!