Since his creation, Venom has become one of the most iconic characters in the Marvel Universe. The unique properties of the Symbiote cause Venom’s persona to change drastically over time placing him in drastically different situations frequently. Most commonly known for his fued with Spider-Man, Venom has been known to have conflicts with various characters. Here are some of our favorite Venom enemies.

Eddie Brock was an exceptional journalist for the Daily Globe. After being contacted by Emil Gregg who claimed to be the serial killer Sin-Eater, Brock began writing popular first page exclusives on the Sin-Eater, while protecting his identity under the First Amendment. Being pressured by both his conscious and the police, Brock decided to publish a front page exclusive revealing the identity of Sin-Eater as Emil Gregg. That edition of the paper quickly sold out and later that same day Spider-Man captured and revealed the identity of Sin-Eater to be detective Stan Carter. Gregg was revealed to be a delusional neighbor of Carter and Brock quickly became the laughingstock among the other journalists.

Brock was then fired from the Daily Globe and was forced to work for a lowly tabloid magazine when his wife Ann decided to leave him. Brock blamed all of his misfortune on Spider-Man and began a strict workout regimen to reduce his stress. Although he honed his physique, his mind became increasingly consumed by hatred for Spider-Man.

Deciding to visit the “Our Lady of Saints Church” to beg for God’s forgiveness he decided to enter the church where he finds the Symbiote suit. Attracted to Brock’s hatred and despair, the symbiote quickly bonded both physically and mentally with Brock. Corrupted by an overwhelming hatred toward Spider-Man, Brock quickly became overcome with his emotions and named his new symbiotic bond Venom.

One of the most prominent Venom enemies was Carnage. Kletus Kasady was an extremely violent and twisted serial killer serving eleven consecutive sentences in on Ryker’s Island for a slew of murders, when the opportunity for escape presented itself in the form of his cellmate, Eddie Brock. Brock at the time was the host for the symbiote and predicted that it would return to him allowing him to escape prison. As Brock predicted, the Symbiote returned to him and allowed him to break out of prison. During the commotion, the Venom Symbiote gave birth to the Carnage Symbiote which latched onto Cletus Kasady. 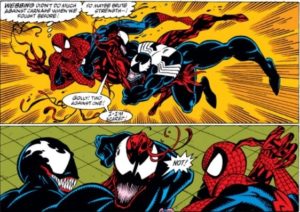 Carnage proved to be stronger than Venom and his bloodlust sent him on a killing spree throughout the city. Being a threat to both Spider-Man and Venom, the two called a truce and worked together to take down Carnage. The truce proved to be short-lived after Carnage was apprehended as Spider-Man sought to contain Eddie Brock.

Among the list of Venom enemies worth mentioning is Eddie Brock. While being bonded to Eddie Brock, there was was a constant struggle for control between the two at all times. When the two first initially bonded, both Brock and the symbiote had a strong hatred for Spider-Man and the symbiote amplified the desire for revenge. As time progressed Brock managed to gain better control over Venom and used his strength to fight crime throughout New York City.

Eventually the symbiote grew even more powerful — increasing its resistance to Brock’s control and learning to speak. Being uncomfortable with Venom’s growing power, Brock refused to satiate his hunger and was ultimately abandoned by the symbiote. Venom, was then sold to Don Fortunato by Brock and soon bonded with his son Angelo Fortunato.

Brock began to feel ill when he discovered his cancer returned and was tormented by hallucinations of the symbiote which lead to his insanity. Shortly after bonding with Angelo, Venom deemed that he was an unworthy host and abandoned him while leaping between building which lead to him falling to his death.

The shipment for the September Venom tee is being finalized and will begin shipping Very Shortly. You may have noticed that the countdown on the Arctify site has been restarted and with that the new theme! Shipping this October is a tee inspired by the man with no fear — Daredevil! We are excited for everyone to begin receiving their Venom tees and can’t wait to hear what you think of it. Make sure to reach out to us on social using the hashtag “IAmArctify” so we can hear what you have to say!