Every December we release a holiday themed tee in anticipation for the holiday season. This December’s tee is a comic-styled holiday Deadpool theme! Deadpool has been involved with a number of different heroes, but one of the most interesting character relationships is between Deadpool and Cable.

The Story of Deadpool and Cable began when Deadpool found employment with a time traveling arms merchant Tolliver. Tolliver recruited a team of mercenaries including Copycat and Sluggo. It was in this time period where Deadpool also met his weapons supplier Weasel and the two quickly became friends. After a short while of working for Toliver, he was sent on a mission to kill a mutant soldier from the future — Cable — who also turned out to be Tolliver’s father. When the two crossed paths, Deadpool underestimated Cable and was quickly subdued by Cable and his band of mutants, the New Mutants.

When both Deadpool and Cable were infected with a deadly shape-shifting Facade Virus, they relied on merging their DNA to survive. Since both Deadpool and Cable shared each other’s DNA, whenever Cable teleported he would drag Deadpool along and sometimes would result in the two merging into the same body. Due to Deadpool’s regenerative abilities, they were able to separate, though it was messy. 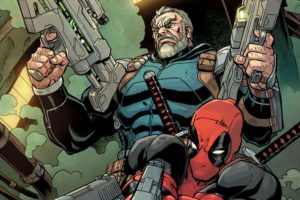 At a later point in time, Cable set out to become a world ruler and posed himself as a threat against off of the worlds leaders. Deadpool was sent to work alongside the X-Men to stop cable however he ended up joining Cable’s side. Deadpool then learned of Cable’s plans to die a martyr to show the world leaders what they could achieve by working together.

The Holiday Deadpool tee will be shipping out for the end of December. make sure to tag any Deadpool fans who need this tee, and be sure to let us know what you thought of our recent Spider-Man Multiverse tee on social media!