Our latest Daredevil tee for October has officially shipped and we have recently updated our site theme for next month to a Spider-Man universe theme. Many of the Spider-Man characters featured on the upcoming tee have never appeared before on an Arctify tee! Here is a sneak peak at some of the characters featured on our upcoming tee for November.

Gwendolyn Stacy (Gwen Stacy) is one of the new characters featured on the upcoming tee. In an alternate reality, Gwen Stacy is bitten by a radioactive spider instead of Peter Parker and receives superhuman powers similar to that of Spider-Man. Upon learning of her new powers, she took on the name Spider-Woman and began using her powers for her own personal gain. 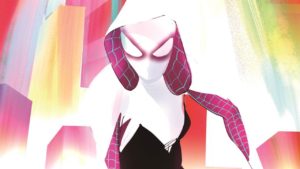 When she hears her father saying that Spider-Woman should be using her powers to help people she begins fighting crime and helping those in need. Commonly referred to as Spider-Gwen, she manages to come in contact with the Spider-Totem which allows her to travel between different universes. While using the totem, she manages to come in contact with classic Spider-Man villains such as Vulture and Venom. Be sure to check out Spider-Woman on the November tee!

In an alternate universe, a young Peter Parker is raised by his Uncle Ben and Aunt May during the Great Depression. While organizing a strike against sweatshops, Uncle Ben is murdered by a powerful businessman Goblin.

Peter Soon after got a job with the Daily Bugle and received a tip that the Goblins men were unloading stolen artifacts. When he arrives at the warehouse he came in contact with a statue of a spider and accidentally broke it. Spewing out of the statue were hundreds of spiders and one of which bit him. Peter soon came to realize that the spider had given him superpowers. Peter then went on to fight crime as Spider-Man, weakening the Goblins influence on the city.

Spider-Woman and Spider-Man Noir are just two of the many new characters to be featured on the upcoming November tee. Stay connected to learn more sneak peaks of the upcoming tee. The November tee will be going out the last week of November so make sure to subscribe to receive your new Arctify tee!