Recently we announced our upcoming Spider-Man Multiverse themed tee which is shipping for the month of November. This tee will feature several characters from different Spider-Man multiverses which have never been featured before. One of the characters who will be featured on the upcoming tee is Miles Morales.

Miles Morales is a young kid from Brooklyn, New York, whose story begins when a thief breaks into Osborn Industries and unknowingly steals a genetically enhanced Spider, just two short months before Spider-Man’s death. After gaining the final spot in a prestigious charter school, Miles goes to visit his uncle Aaron Davis who turns out to be the theif who had broken into Osborn Industries. While there, Miles gets bitten by the genetically enhanced spider. He quickly realized that he had gained Spider-Man-like powers, yet felt that he wanted to just be normal and leave the heroic acts to Spider-Man. 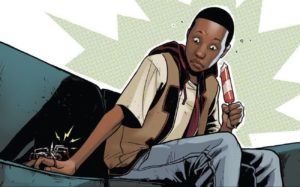 Two months later, Miles witnessed Spider-Man die while trying to save his family. feeling guilt for not helping Spider-Man, he decided to take on Peter Parker’s ideology that “With great power comes great responsibility” and with that, he continued the heroic work of Spider-Man.

Miles began wearing a Spider-Man Halloween costume and took a shot at crime fighting. His lack of training lead t him being captured and interrogated by Nick Fury at S.H.E.I.L.D. headquarters. While here, Electro woke up from a coma and began fighting the Ultimates. With the help of Miles, they were able to subdue Elektro, which won Miles some respect. He continued to try and fight crime, but his lack of experience proved challenging. After Studying old videos of Spider-Man he began to gradually improve and has continued to develop into his new Spider-Man role.

The Spider-Man Spider-Verse theme tee will be shipping at the end of November and should be arriving before the beginning of December. Make sure to reach out to us on social media  and let us know which character you are most excited to see on the upcoming tee!